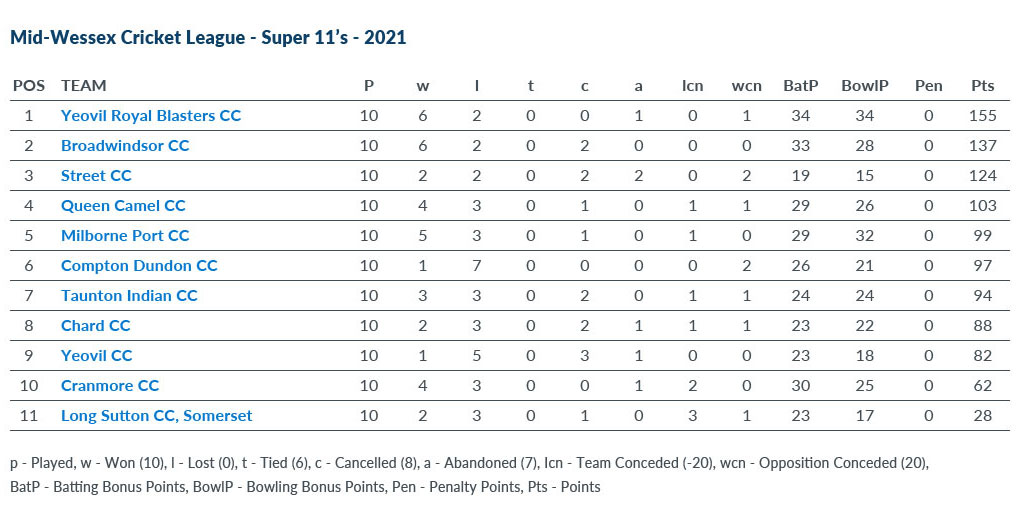 Broadwindsor CC opened their season with a narrow 2 wicket defeat at Yeovil in the Mid-Wessex League on Sunday. Despite fielding a weakened side and being a man short the villagers battled hard and almost pulled off a surprise victory. On winning the toss and electing to bat, Broadwindsor collapsed to 40-5 on a pitch of variable bounce, but were rescued by a superb knock of 83no from Tom Goatley. Skipper Ade Phillips struck a patient 31 in a century partnership to push the total to a respectable 162. In reply Yeovil raced to 51-1 and looked to be cruising to victory but a fine spell of bowling from 14 year old Jack Ronan, who took 4 for 24 from 6 overs, pegged Yeovil back, but eventually they sneaked home with 2 wickets and 3 overs to spare.
Yeovil CC 19 pts. Broadwindsor CC 8 pts.
‍

Broadwindsor picked up 16 points in winning a tight tussle at Queen Camel on Sunday. After losing the toss and being put in the villagers racked up a fine 216-4, thanks mainly to Chris Park (88) and Ross Baker (70) who added 145 for the second wicket. In reply Queen Camel reached 96-2 off 20 overs, the wickets falling to Baker and Stafford-Smith. The steady rain finally forced the players off and the calculators decided the result.
Queen Camel CC 7 pts. Broadwindsor 16 pts.
‍

Broadwindsor CC celebrated the purchase of their ground with a Captain’s XI versus Chairman’s XI game on Sunday. After being inserted the Captain’s XI racked up 204-4 off their 30 overs with good contributions throughout the order. AdeWaddington 25, Chris Park 21, Ross Baker 20, Joe Hawkins 35, Toby Pattemore 46 and Henry Everitt 24 all batted well. For the Chairman’s Xl former England test all-rounder Chris Lewis (32 caps) showed his class with 1-14 from six accurate overs. Lewis then opened the batting and struck a superb 69 with 11 fours and 3 sixes before being stumped off the bowling of young Paul Edwards. Tom Fowler stroked 46 as the Chairman’s XI made a fine start. Skipper Ade Phillips 2-26, Baker 3-36 and Park 2-16 pegged them back as the Captain’s XI sneaked home by 12 runs.
‍

Rain unfortunately brought a premature end to Broadwindsor CC’s friendly with welsh side Lisvane CC on Sunday. Thanks to a big effort from the ground staff the game started on time but was reduced to 30 overs due to the wet outfield and dodgy forecast. On winning the toss the home side elected to bat and totalled 176-6. Richie Runyard top scored with a fine 79 which included six fours and six maximums, while Adam Moss (34) and AdeWaddington (23) added good support. Former Broadwindsor starlet Jack Walklett led from the front for Lisvane with 2-15 from 5 overs. In reply the visitors had raced to 42 for the loss of one wicket (taken by Toby Pattemore) before the rain got heavier and forced an early trip to the pub.
‍

Broadwindsor welcomed old friends Les Erbs for a 30 over game on Saturday. After winning the toss the tourists elected to bat and totalled 151-6, thanks mainly to a fine 72 not out from skipper C.Campbell and 50 from B.Baker. The home bowlers stuck to the task admirably in the scorching heat, skipper Ade Phillips claiming 2-28 and wickets for A.Crawford, J.Ronan, T.Fowler and G.Coutinho. In reply the villagers looked well placed at 132-4, as Crawford (57) and Phillips (20) added 81 in a fine partnership. But a late flurry of wickets saw an agonising one run defeat, as Campbell (3-14) and Shane (3-11) mopped up the tail.
‍

Broadwindsor travelled to Compton House to face new team Yeovil Royal Blasters in the mid-Wessex league. The hosts won the toss and looked to be heading for a huge total as they raced to 100-3 in 16 overs. The villagers again showed their resilience as Crawford (4-48), Phillips (2-42) and Ryan Sweetman (2-5) saw the home side bowled out for 193. Again Broadwindsor made a solid start as Crawford (65) and Clive Stafford-Smith (27) added 75 for the 3rd wicket, but again ran out of steam, as the home side bowled straight and with the help of the enthusiastic home umpire emerged victorious by 37 runs.
Yeovil Royal Blasters CC 19 pts. Broadwindsor 8 pts.
‍

Broadwindsor moved up to 4th in the Mid-Wessex League table with a comprehensive 6 wicket win on Sunday. After winning the toss and inserting the home team, the villagers bowled well to restrict chard to 150-7 from they’re allotted 40 overs. Only R.Kilde (40 not out) and H.Evans (27) got going as the 8 bowlers used kept things tight. Although some catches went down some excellent ground fielding added to the batters frustration. Clive Stafford-Smith (3-15), Jack Ronan (1-8), Alistair Crawford (1-34), and skipper Ade Phillips, with a miserly 1-17 from 8 overs, were all in the wickets. In reply Broadwindsor lost both openers fairly early on but Crawford (52 not out), Dan Hillier (24) and Adam Moss (26) saw them cruise to victory with more than 10 overs to spare.
Chard 3 pts. Broadwindsor 13 pts.
‍

Broadwindsor suffered a heavy defeat in their latest Mid-Wessex League game on Sunday. Struggling with availability and injuries the villagers travelled with only 9 players, while rain delayed the start and reduced the game to 30 overs per side. The home side won the toss and chose to bat, rattling up 229-5, with opener Williams bludgeoning 108 not out. Ali Crawford (3-47) led the attack, the other wickets falling to Stafford-Smith and Ronan. The only bright spot in Broadwindsor’s reply was a battling performance from 13-year old Oliver Hey who survived for 11 overs to finish not out.
Cranmore 19 pts. Broadwindsor 2 pts.
‍

Broadwindsor moved up to joint 3rd in the Mid-Wessex League with a fine 6 wicket victory at Milborne Port on Sunday. On a wet, underprepared pitch and very slow outfield skipper Ade Phillips had no hesitation in asking the home team to bat first, but Port were looking good on 80-1 after 14 overs. The introduction of spinners Jack Walklett (1-34) and Ali Crawford (1-23) firstly slowed the run-rate and then removed the openers. Then 14 year old Jack Ronan produced a superb spell, taking his first ever 5 wicket haul as he ripped through the home batting, taking 5-10 from 5 overs, including twice narrowly missing a hat-trick. Chasing 116 to win the villagers lost two quick wickets but rebuilt with a 73 run stand between Ross Baker (59 inc 7 fours) and Adam Moss (27). Although they fell in quick succession, Walklett and the skipper guided Broadwindsor home with more than 11 overs to spare.
Milborne Port 4 pts. Broadwindsor 19 pts.
‍

Broadwindsor secured a fine 80 run victory in their latest Mid-Wessex League game on Sunday. After being inserted on a slow, damp wicket the home side lost Will Moss to a first baller and Ross Baker (16) to find themselves in trouble at 21-2. Ali Crawford then took control with a superb innings of 90, striking nine fours and four sixes. He found good support from Adam Moss (27) and AdeWaddington (19 not out) and 29 extras helped the final total up to 205-7 off the allotted 40 overs. In reply, Street were tied down by some tight bowling by openers Baker (5 runs from 4 overs) and Nick Hollely, and the pressure told as Hollely produced a superb direct hit to run out the dangerous opener French. Then the youngsters took over as Jack Ronan continued his fine form with 4-10 off 6 overs and Will Swan (3-9) ripped through the visitors. Skipper Ade Phillips and Will Moss chipped in with a wicket apiece to cap a fine performance from the villagers.
Broadwindsor 20 pts. Street 6 pts.
‍

Broadwindsor CC closed the gap on the top two with a comfortable 68 run win in their latest Mid-Wessex League game on Sunday. After being inserted the villagers racked up 262-4 off their 40 overs with contributions throughout the order. Dan Hillier (65 not out), Jack Walklett (58 not out), Adam Moss (40), Ali Crawford (33) and AdeWaddington (25) all batted well as the runs flowed freely. In reply, the home sides innings was held together by Ardash who struck a fine unbeaten century but they were always behind the required rate, as wickets fell regularly. Ross Baker (3-27) and Walklett (2-32) led the way as Broadwindsor picked up 19 points.
TICC Curry Rivel 7 pts. Broadwindsor 19 pts.
‍

Broadwindsor moved up to 2nd in the mid-Wessex league with a resounding 9 wicket victory at Compton Dundon on Sunday.After winning the toss the home side elected to bat on a flat pitch with small boundaries and totalled 183-3 off their 40 overs. Some fine bowling from spin twins Jack Walklett and Ali Crawford, who conceded 21 and 23 respectively from their 8 overs each, kept Dundon tied down as they reached only 60 from the first 20 overs. The acceleration came through opener Ben Chislett (73) and home skipper Toby Welch (47no) as Nick Hollely claimed 2 late wickets. The villagers reply started positively as AdeWaddington and Chris Park added 50 for the first wicket in just 8 overs. Crawford (57 no) then continued his fine form with his fifth half century of the season as he added an unbroken 140 with Park, who brought up a superb century with a six, as Broadwindsor cruised home with a full 17 overs to spare.
Compton Dundon 4 pts. Broadwindsor 16 pts.
‍

Broadwindsor hosted Devon tourists Woodbury & Newton St Cyres on Saturday but stuttered to a 78 run defeat. The visitors won the toss and elected to bat and were in trouble early as both openers recorded ducks as they were 1 for 2..., however the tourists skipper and former Broadwindsor prodigy Steve Boundy struck a superb 102 not out to steady the ship as Woodbury & Newton St Cyres reached 166 for 5 wkts in their 35 overs. Ross Baker bowled tremendously to take 5-22 and there were first wickets for the club from 14 year olds Brody Gunning (2-18) and Olly Hey (1-20). In reply the villagers made a disastrous start, slumping to 21-5 before the tailenders Hey (13no), Ade Phillips (13) and Fran Caswell (22) brought a little respectability to the score.
‍

On Sunday Broadwindsor CC enjoyed a 15 run victory in a thrilling final Mid-Wessex League game to clinch the runners-up spot. The home side elected to bat and racked up 241-6 with fine contributions throughout the order. Openers Chris Park (37) and AdeWaddington put on 54 for the first wicket, Ali Crawford (33), Adam Moss (40) and Dan Hillier (40) all batted well with Ross baker (49no) adding quick runs at the end. But the visitors made a fine start to their reply with openers Hawksworth (62) and Miller (38) adding 102 in just 15 overs. The game was turned when skipper Phillips threw the ball to part-time bowler Park and he took 3 quick wickets, finishing with 4-61. The visitors middle order continued chipping away but kept losing wickets, and the pivotal 39th over started with Sutton needing 37 to win. Phillips the got hit for 3 consecutive sixes but recovered to take the crucial wickets of Lyons (29) and O.Phillips 35 as the villagers sneaked home.
Broadwindsor 19 pts. Long Sutton 8 pts.
‍